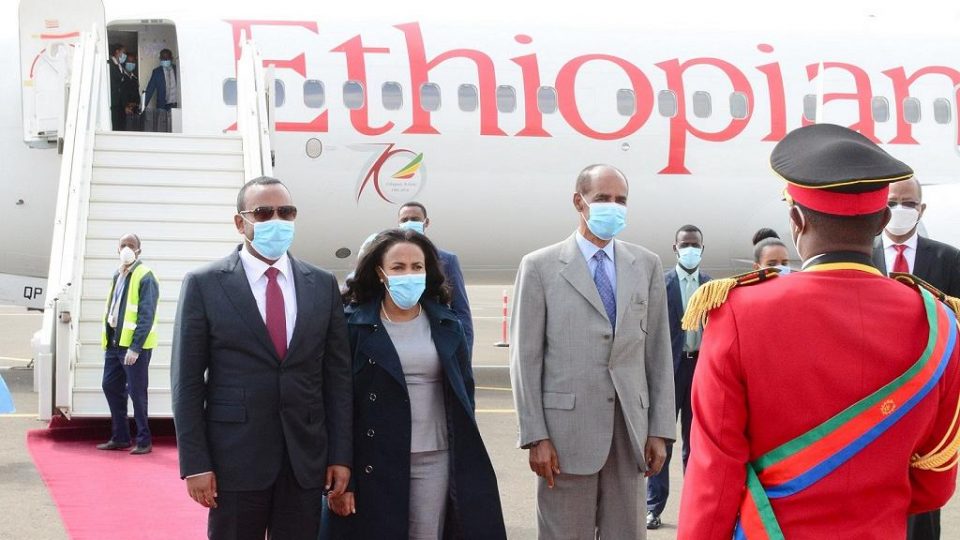 Ethiopian Prime Minister Abiy Ahmed Ali on Saturday arrived in the Eritrean capital Asmara for a working visit. He was received at the airport by his host President Isaias Afwerki at the airport.

“The two leaders will discuss further consolidation of the warm bilateral ties between the two countries as well as enhancement of regional cooperation,” Eritrea Information Minister said in a tweet.

“In their extensive meeting today, President Afwerki PM Abiy Ahmed reviewed the progress achieved and obstacles encountered in the past two years in the implementation of the historic Declaration of Peace and Friendship signed between the two countries in July 2018,” the Minister added.

Abiy was with his wife along with State Minister Ambassador Redwan Hussein and Speaker of Parliament Mr. Tagesse Chaffo. It is Abiy’s first visit outside Ethiopia since the deadly internal crisis that followed the assassination of a prominent Oromo artiste.

The second anniversary of the peace deal occured in the midst of the deadly protests that saw over 260 people killed and scores arrested. Internet was also cut across the country and only restored after over two weeks.

Eritrea in a statement on the anniversary stressed that the peace deal remained robust and compact despite the efforts of unnamed detractors to derail it.

The Eritrean government says a 2018 peace deal with Ethiopia remains in good shape and was progressing despite efforts by detractors to portray it as a stalled failure.

Information Minister Yemane Meskel posted the general state of the deal which chalks its second anniversary today, July 9. “Overall progress made so far remains significant by all contemporaneous standards,” he said in a tweet.

Adding: “ This is in spite of the desperate, last-ditch efforts of the regressive forces of inertia and darkness – TPLF and its ilk – to scuttle and rollback enduring peace with its dividends to the two countries.”

TPLF is the Tigray Peoples Liberation Front, the ruling party in Ethiopia’s Tigray region – it shares a long boundary with Eritrea, hosting the border crossing that were opened to fanfare but have all been shut unilaterally by Eritrea, according to reports.

TPLF is currently an opposition party to the new ruling party at the federal level, Prosperity Party led by PM Abiy Ahmed.

“The Eritrea-Ethiopia peace process has catalysed a conducive climate of regional cooperation. Substantial challenges that still remain will no doubt be scaled in the period ahead through resolute and concerted action on the basis of shared vision & prevailing political good will,” the minister added.

“It is important to remember there is no formal peace treaty between Ethiopia and Eritrea. Border controls have been reinstated. Talks on economic cooperation, use of ports stalled.

“What is holding Abiy & Isayas together is their mutual antipathy to TPLF and Tigray. Nothing more,” these were recent views shared by Rashid Abdi, a former Crisis Group researcher who is a keen political watcher for the Horn and East Africa region.

The second anniversary of the July 9 deal comes at a time Abiy is dealing with an internal crisis that spared protests in the capital and surrounding Oromia region. Over 200 deaths and 3,500 arrests have been made whiles today is the tenth straight day that internet access has been cut.