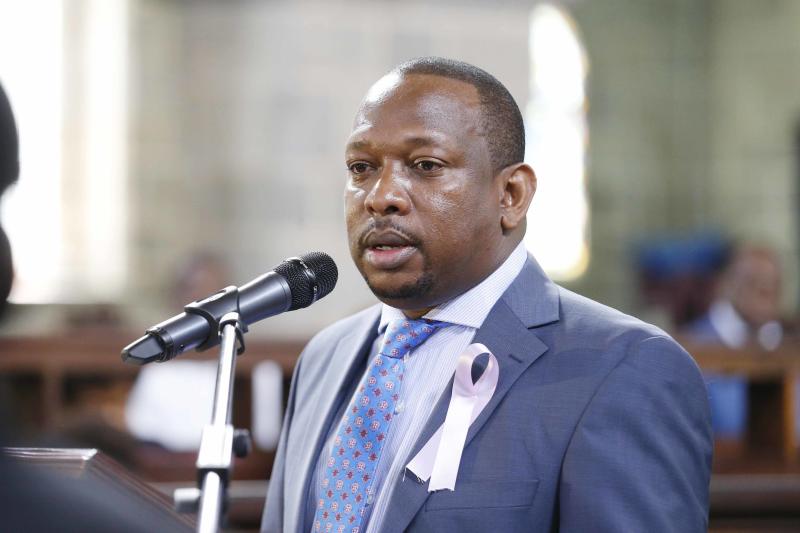 After months of investigation, the anti-corruption agency has flagged transactions through which it claims Nairobi Governor Mike Sonko diverted millions of shillings to his personal bank accounts.

In one instance, the commission’s forensic investigator Simon Cherpka alleges, Sh27.4 million was wired into Sonko’s accounts at Equity Bank from three companies which had been awarded multi-million shilling contracts under questionable circumstances by the county government.

“Between June 2017 and February 2019, investigations have revealed massive fraud, procurement irregularities, misappropriation of public funds and conflict of interest through inconsistent and exaggerated payments made to individuals and proxy companies at City Hall,” says Mr Cherpka in an affidavit filed in court.

He claims contracts were awarded without following due procedure and millions of shillings found its way back to the governor’s personal accounts and county officials who were part of the deals.

EACC filed the affidavit as Sonko continued with attempts to stop the commission from summoning him, continuing with investigations or prosecuting him in relation to the alleged corruption at City Hall.

He, however, failed for a second time yesterday to obtain orders restraining the EACC as Justice John Onyiego deferred the hearing of the application to Thursday next week.

“Having listened to the applicant and opposing submissions, I do not find it appropriate to grant the interim orders he is seeking at this juncture. I will allow all parties to file their responses and submissions before the hearing on Thursday next week,” ruled Onyiego.

The governor claims in his petition that he is being persecuted for standing in the way of alleged land grabbers who wanted to illegally acquire a public land in Mugoya Estate in Nairobi and for questioning the fraudulent transfer of Integrity Centre to the EACC.

He accuses the commission’s director of investigations Abdi Mohamud of masterminding his tribulations by initiating malicious investigations against him due to his defence of public property.

But Mr Cherpka in his affidavit defended the commission against claims of malice, arguing they had the mandate to investigate claims of corruption and the governor will have a chance to defend himself in case they recommended his prosecution.

According to the investigator, the commission received reports that some Nairobi county officials in collusion with private companies were engaged in fraudulent schemes to embezzle public funds in the award of tenders for provision of goods and services to the county.

On investigations over the alleged fraudulent garbage collection contract with Hardi Enterprises Ltd, Mr Cherpka claims that the county secretary, an appointee of Governor Sonko, usurped his powers and hurriedly appointed a committee to award the contract.

“Evidence established that the negotiation committee meeting was pre-arranged with a common understanding that the six bidders agree on same rates after which the tender was awarded to Hardi Enterprises Ltd in June 2018 even though it did not meet the requirements,” he claims.

He alleges that in a period of five months between October 2018 and March 2019, Hardi Enterprises Ltd received a total of Sh357 million from the county for purported solid waste collected and disposed.

Interestingly, he says the vehicles the company claims to have used for garbage collection included saloon cars, vans and motor cycles which have no capacity to haul waste and the registered owners of the vehicles denied leasing them to the company.

He says records from the Registrar of Companies showed that directors of Hardi Enterprises Ltd are Anthony Mwaura and Rose Njeri, and further analysis of their accounts showed that they transferred Sh55.8 million to the accounts of Toddy Civil Engineering Company Ltd which they also own.

On December 17, 2018, he claims the commission established that Toddy Civil Engineering Company Ltd transferred Sh3 million to Sonko’s account at Equity Bank, which could have been a kickback from the garbage collection contract.

Mr Cherpka adds that analysis of the governor’s bank statements at Kenya Commercial Bank (KCB) revealed that prior to the award of contract for garbage collection he received Sh8.6 million from Mr Mwaura for campaign support and settling of debts.

“It is evident from the payments that Anthony Mwaura and Mike Mbuvi Sonko have a history of association which has extended to fraudulent transactions with the county government,” he says.

According to the investigator, Sonko allegedly received Sh17 million from Amaco Ltd, Sh8.4 million from Yiro Enterprises Ltd and Sh2 million from Web Tribe Ltd at a time the companies were conducting business with the county government.

He added that the governor has not demonstrated that EACC acted irrationally in initiating the investigations or if the intended criminal proceedings will be for ulterior motives.

The case is scheduled for hearing on November 28.