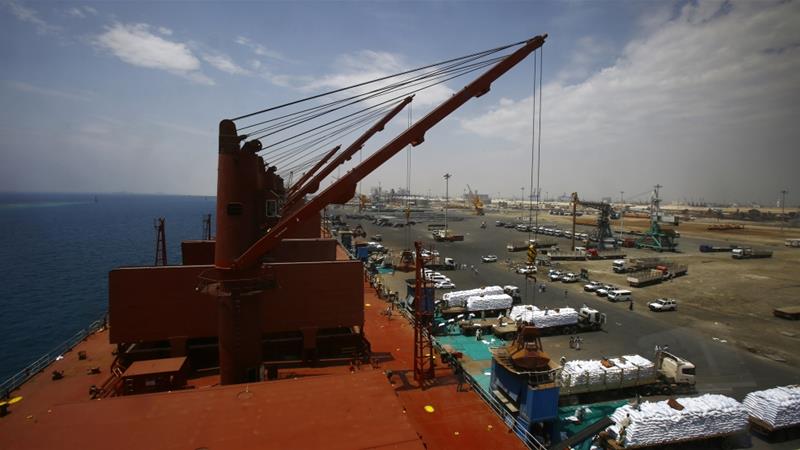 A strike by angry port workers led to the suspension of a similar deal in 2018 [File: Ashraf Shazly/AFP]

Sudan’s transitional government is taking steps to hand over control of its principal seaport to a company owned by the United Arab Emirates (UAE), a move that incensed port workers who say they will protest privatisation of the country’s national terminal.

Officials in Sudan, who spoke on condition of anonymity, told Al Jazeera the government was in the process of securing a deal with UAE giant Dubai Ports World (DP World). The agreement would allow the logistics company to run Sudan Port.

Samy al-Sanea, an engineer and leader of a team under the Sea Ports Corporation, Sudan’s national port operator, confirmed to Al Jazeera late last month that DP World has been seeking to gain control of the country’s port operator.

“We received word that DP World was interested,” al-Sanea said. “We’re aware of DP World’s objective. We fear for the country and don’t want to lose a strategic and economically vital aspect.”

Al Jazeera reached out to DP World for comment but has yet to receive a reply.

The company reportedly hired a former Israeli intelligence officer, Ari Ben-Menashe, to lobby on its behalf for support from the United States government in its bid to operate Sudan’s largest terminal.

All-Monitor reported in January that DP World signed a “$5 million contract – of which $1.5 million was paid up front – with Ari Ben-Menashe and his Montreal-based Dickens & Madson” to lobby Sudan for a 20-year concession.

Dagalo, nicknamed Hemeti, is now Sudan’s Transitional Military Council’s deputy chairman. He has maintained close ties to the UAE, and in September last year made a visit to the country, where he discussed forming a new political party, sources told Al Jazeera at the time.

It is not the first time the UAE has set its eyes on ports on the African continent. It has been working to control terminals in the Horn of Africa in recent years, with reports that DP World secured contracts in Somalia and Djibouti.

Al-Sanea said the company had “political objectives” in these countries, adding that Sudan’s port workers would not allow for such an agreement to go through.

“DP World is implementing a political agenda, not an economical one,” he said.

In remarks made last December, the UAE’s energy minister, Suhail al-Mazroui, reiterated his country’s wishes to develop the Port Sudan region, which overlooks the Red Sea.

Meanwhile, the head of the port’s workers union, Aboud al-Sherbini, said employees reject the privatisation of the port.

“We wholeheartedly refuse to sell an inch of our land to the UAE … We’re ready [to oppose the sale]. The square is what separates us from those who are ready to sell the nation,” he said.

The latest move comes a year after a strike by workers led to the suspension of a similar deal, which was signed in 2018 under overthrown President Omar al-Bashir’s rule.

The previous deal with ICTSI Middle East DMCC, a Philippines-owned company with offices in the UAE, was suspended after the transitional government, headed by Prime Minister Abdalla Hamdok, came to power.

According to the 2018 leaked agreement obtained by Al Jazeera, ICTSI was meant to be granted access to operate, manage, and develop the port over a span of 20 years, in return for money the government said would aid Sudan’s sanction-hit economy.