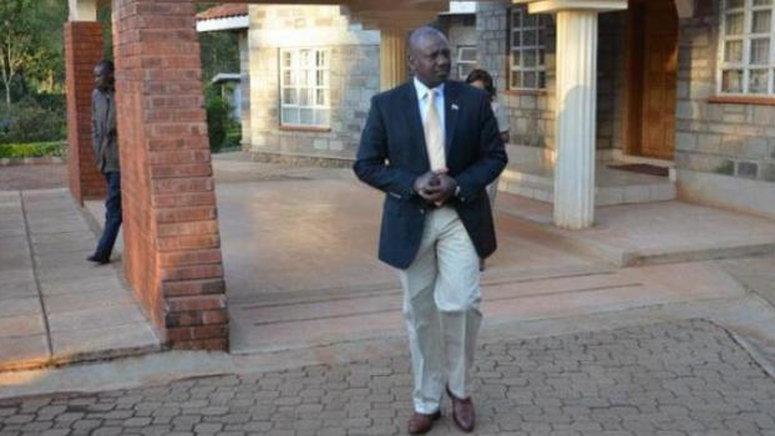 “If there is respect and loyalty that can be displayed. There is no one who has displayed loyalty and respect to Uhuru than myself.”

This was proclamations by the Deputy President William Ruto when he opened up to discuss his relationship with President Uhuru Kenyatta and 2022 succession politics. In an interview with NTV reporter Ken Mijungu, at his Karen home in Nairobi, the DP Ruto affirmed that his relationship with the Head of State is deeper, intact and unmatched. He stated that when it comes to counting those who have stood with President Uhuru in his political career, only his wife, First Lady Margaret Kenyatta would match his efforts.

The DP who sounded emotional went on a nostalgic path to remember his first encounters with the President during the infancy of their political careers. In a coded language and hitting at the opposition politicians, the DP said that some of them who are claiming to be siding with the President have never voted or supported him in his political career. “These people, many of them are people in NASA are people who have never voted for Uhuru Kenyatta. I knew Uhuru in 1998. The former President sent me to Mark Too. I had to persuade Mark Too to step down [so that Uhuru could be nominated to parliament],” he said.

He revealed that at the time President Uhuru conceded defeat after running for president in 2002 on KANU ticket, only three of them arrived in Serena. Close to fifty KANU members had left. He further claimed that Amani Party leader Musalia Mudavadi, Wiper leader Kalonzo Musyoka, and Agriculture Cabinet Secretary Eugene Wamalwa all turned down a golden chance to team up with Uhuru in 2013, a duty he gladly embraced and they won the elections.

This comes amidst reports of a plot to use the Building Bridges Initiative to kick out the DP by giving the President powers to sack him. On Tuesday, Borabu MP Ben Momanyi told the Standard such a move was being considered in the adoption of the BBI report in a quest to establish a government of national unity. “We have agreed to address such emerging issues by handing the president powers to sack his deputy. You cannot openly fight your boss,” said Momanyi. But in an attempt to rubbish tension, the DP during the interview said that there is nothing like a broken relationship between him and Uhuru. He branded them as media creations. He said: “I have read many headlines… ‘The marriage has died’ The bromance.”

“Uhuru Kenyatta is married to Margaret I am married to Rachel. We were elected to serve the people.” The DP defended his stance when he publicly lashed Interior Cabinet Secretary Dr Fred Matiang’i and his Principal Secretary Karanja Kibicho in past on separate occasions. He said some of the blames are created by his allies whom he has no powers over. “You will be surprised as to how much war I have with these people. Many times I speak after they have spoken.” Despite Tanga Tanga faction consistently reminding President Uhuru to the owner his pledge by supporting the DP’s presidential bid; Ruto maintained that there was a condition in their political pact.

“I supported Uhuru not because I wanted him to support me. I never made a claim and never made a condition,” he stated. “And I know that he is going to support the candidate of Jubilee when that time comes.” Ruto waded into the BBI debate where certain political leaders have called for the establishment of a powerful premier. He remained coy when asked his views about Uhuru taking up the role of a prime minister upon the expiry of his term. “I have never heard Uhuru Kenyatta say that he wants to extend his term. Until he pronounces it then I will take it. ICC and other cases The Standard on January 21 established that Directorate of Criminal Investigations was reopening a case in which land was sold to Kenya Pipeline at Sh272 million in 2011. In the case, the DP and his co-accused were acquitted after the prosecution failed to prove that the two received money from Kenya Pipeline Corporation. But according to the DP, the reopening of the case has lots of political ill motives underneath. He attributed the move to 2022 succession politics. “Every time there are succession politics there are cabals.

There are those who play games to install those who can serve their interest and not people,” he said. “There was no case. If the money went to Transnational Bank and the bank has accepted that the money went to them. Why is Ruto in court?” He sensationally claimed a police boss attached to the NIS had told him that there are plans to reopen his ICC case just to pile misery on him ahead of the 2022 poll. “You never know, maybe there will be other cases. They are looking for witnesses.

My political opponents want to find ways to stop my candidature,” he said. BBI meeting The DP remained mum and did not disclose whether he was planning to attend the BBI meeting at Mombasa’s Tononoka Grounds on Saturday. He said he would be consulting with the president on the way forward. However, Ruto said that the planning and discussions of the events were sinister, judging from what transpired in Kisii and Kakamega meetings. He said: “BBI is not a place where you ask who to go to Mombasa. People must stop deciding for others who for BBI. It is an open discussion.” “I have already talked to Yusuf haji and I told him that I want an opportunity to present my ideas.” He took a dig at ODM and a section of Jubilee legislators who drive the BBI meetings as he accused them of propagating division. He claimed that his support for BBI had left critics red-faced and exposed. “There were people who believed and wanted to drive a narrative that William Ruto will oppose the BBI.

In fact, some of them were dazed when I support I was supporting the BBI.” On Thursday, ODM leader Raila Odinga said that all leaders are welcome to the forum, despite the conditions given by pro-BBI legislators on Wednesday.

“Everybody is welcome. We are saying that the game is for inclusion rather than exclusion. We want this to unite the people of Kenya and not to divide them,” Odinga said. Odinga said that the BBI drive is not tailored to isolate any particular community because it is a Kenyan agenda aimed to unite the country. “It will be misguided for someone to think that he can sabotage this process. This is a people process,” Odinga said. But in response, the DP lashed at Odinga saying that no one ought to set conditions on a public event, in which everyone should be welcomed.  “Kwani BBI ni yako? Kwani BBI ya Kenya ni yako? Wewe unatualika kama nani? Kwani sisi ni wakimbizi?” (Is BBI yours? On what ground are you inviting us to the BBI meeting? And, are we refugees?) “I am asking Mr Haji (Senator Haji Yusuf) to reveal the venue of the meeting to allow all Kenyans to gather there and air their views. Kilifi Governor Amason Kingi fired a warning to the politicians who are planning to attend the meeting that they should let the Coastal region residents air their views because they are the host of the forum. “When you come here just remember that this a chance for a Coastal resident to discuss the BBI report. So come knowing that you have to give them that chance,” said Governor Kingi. His Mombasa counterpart Governor Hassan Joho cautioned against reducing the BBI meeting into a political rally.