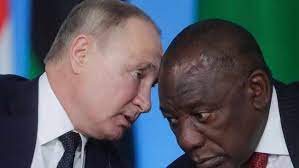 Cyril Ramaphosa has once again attempted to justify South Africa’s controversial stance on the Russian invasion of Ukraine – and he argues that NATO forces ‘failed to heed the warnings’ about their expansion in Europe.

President Ramaphosa, who also confirmed he’d spoke with his counterpart in Russia Vladimir Putin this week, believes South Africa can remain neutral in this conflict – acting as a mediator between the two warring states. Cyril was under the grill while facing a set of Parliamentary questions this afternoon.

However, this passive diplomacy has ruffled feathers at both a domestic and global level. The ANC has deep, historical ties with Russia, which were forged during the cruel regime of apartheid. Nevertheless, Mzansi’s failure to condemn what many see as an obvious ‘violation of international law’ has left a bitter taste elsewhere.

Ramaphosa, though, remains resolute in his views: The head of state is adamant that NATO’s attempts to gain a bigger foothold in Eastern Europe is also responsible for causing this bloodshed. His censure of Russia’s use of force was much meeker, however, as Cyril tried to occupy the fence as best he could.

“The war could have been avoided if NATO had heeded the warnings from among its own leaders and officials over the years that its eastward expansion would lead to greater instability in the region.”
“It is important to understand and articulate the causes of the conflict, and advocate for peace building measures, we cannot condone the use of force or violation of international law.”
The South African
previous post