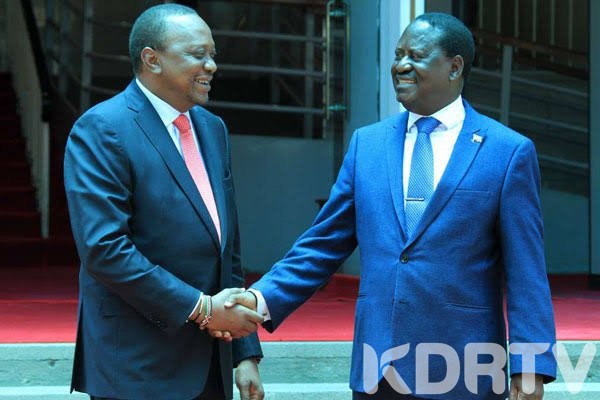 Questions have been raised after Siaya Senator James Orengo pointed fingers at President Uhuru Kenyatta as a stumbling block in the division of revenue stalemate.

On Tuesday, during the vote to approve the third revenue formula, Orengo claimed that Uhuru’s unavailability has divided the country and lawmakers.

“We would not have been here if he was more accessible. I’m telling you without being afraid. I’m not saying it for me, I’m saying it for the country,” the Senate Minority Leader said.

However, Kenyans believe that Orengo could have been referring to a bigger issue. Could the President be avoiding his handshake brother Raila Odinga?

There is no way Uhuru would have been the stumbling block in the division of revenue stalemate. That is one of the core functions of the Senate. Senators must soberly discuss how the monies will be distributed without undue influence from the executive. That is what we pay them to do.

Raila surprisingly moved to publicly support the controversial formula on Monday. This is despite the formula proposing budget cuts for Coastal and North Eastern Counties. Four out of the six Coastal Counties have ODM Senators and they viewed this as a betrayal. Was Raila acting out of panic after Senate Majority Whip Irungu Kangata threatened ODM to support the formula or forget the BBI report?

Since Tuesday, Mt Kenya leaders have been attacking Raila accusing him of failing to ensure that the formula got through. Gatundu South MP Moses Kuria says that 18 out of the 25 Senators who voted against the amendments proposed by Kangata are from NASA and the handshake. Raila did not rally his troops to support Mt Kenya bid. The region would have been the biggest beneficiary of the new formula.

Does Uhuru really need Raila? That is the million-dollar question