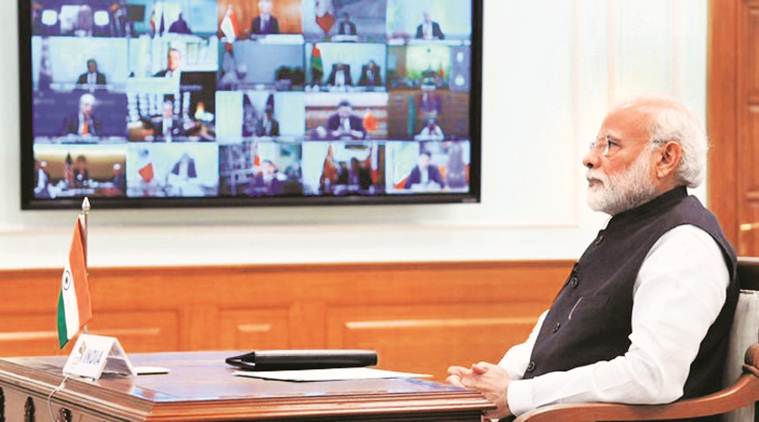 From the Prime Minister what we need to hear about are the steps that his government has taken to ensure that the virus is vanquished. He needs to share with us why so few Indians have been tested so far. (Photo: ANI)

It is only when he shows that he trusts us enough to give us some idea of what he plans to do to bring us safely through this terrible battle, that has no battlefield and no visible enemy, will we be able to trust him to lead us from these days of darkness to light.

The world has changed completely since I last wrote this column. On the day that you last read it, we were under a voluntary ‘Janata Curfew’, without knowing that this was a rehearsal for a much longer and harsher curfew. I begin by pointing this out because nothing is more important in this time of national crisis than for the trust between the Indian State and ordinary citizens to be restored. At the moment it is in tatters because the State seems to be acting against us (supposedly in our interest) but without the smallest attempt at softening the harshness of the measures being taken to save us. ‘Jaan hai to jahan hai’, the Prime Minister said poetically, and it is true that the world only matters if we stay alive. But, he needs to bring not just words borrowed from Urdu poetry to reassure us but a large dose of compassion as well.As I write this, those images of migrant workers walking hundreds of kilometres to get back home fill my head. As does the Reuters video sent to me by an American friend this morning of policemen beating up and humiliating people trying to get home. What she wrote above the video she sent me was, ‘My god — the horror of this. It’s a new level of monstrous autocracy. These desperate people….’ When I put the video on Twitter, the people who shriek loudest about their devotion to Narendra Modi went berserk. They charged ‘so-called journalists’ like me of having an ‘agenda’ to defame India.

Their ‘nationalism’ is not offended by policemen who behave like brutes or an Indian State that does not provide transport to hungry, poor, helpless migrant workers trying desperately to get home. It is offended by journalists who try to speak for those who have no voice. What is frightening is that most of them seem to be members of some kind of core BJP support group on social media. It is the same people who show up on my timeline every time I have dared to criticise the Prime Minister. So, without intending to, they confirm that Modi is allergic to criticism.

He has the support of the whole country in this fight against the Chinese virus. But does he trust us enough to tell us what his strategy is? It seems that he does not, or he would have warned our poorest citizens that they needed to get home before this long curfew began. He could tell us now what exactly will be done during these curfewed days to strengthen our medical defences. Will there be new field hospitals for those unlucky enough to get sick? Will ordinary hospitals provide higher standards of cleanliness? Will doctors and nurses on the frontline be given the equipment they need to prevent them from getting sick?

As the Commander-in-Chief of this terrible war against an invisible enemy, we need to hear from him often and with clarity. Donald Trump hates the media but is on national television every day to try and reassure people. The Governor of New York, Andrew Cuomo, has become a national hero for the way in which he has led from the front. Why is it that in this time of crisis all our chief ministers seem to have disappeared and the Prime Minister has only been seen twice? Could it be because that vital trust between the State and the citizens is truly broken?

The Finance Minister appeared last week to announce a relief package for ‘the poorest’ and she named migrant workers as being in this category, but seemed not to know that they did not even have the means to get home to benefit from this package. I am not going to analyse the details of whether the ‘package’ actually will provide the relief that people need. Others have done this well in this newspaper. What I noticed when Nirmala Sitharaman was speaking was that she left me feeling not even a little reassured. Instead of going into the details and the nitty-gritty that should ordinarily be dealt with by a lowly official, what I would like to have heard from her was the grand plan to save the Indian economy from tanking. Does she have a strategy to ensure that this does not happen?

From the Prime Minister what we need to hear about are the steps that his government has taken to ensure that the virus is vanquished. He needs to share with us why so few Indians have been tested so far. Is it because we do not have enough testing kits? If this is so, then we need to know when there will be enough available? He needs to explain exactly why this curfew is for 21 days only? Instead of telling us on the 21st day that it is being extended, it would be truly reassuring if he explained in advance why this might be necessary and whether it will be relaxed in some states and cities before others.

It is only when he shows that he trusts us enough to give us some idea of what he plans to do to bring us safely through this terrible battle, that has no battlefield and no visible enemy, will we be able to trust him to lead us from these days of darkness to light. Meanwhile, stay safe, stay healthy.