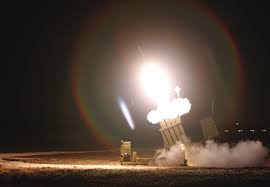 Stanly Johny
A Palestinian boy watches smoke billowing from targets during Israeli airstrikes on the southern Gaza region of Khan Yunis, controlled by the Hamas movement, on May 11, 2021.   | Photo Credit: AFP

Hamas seems to be prepared for this moment, given the way it is firing rockets.

The crisis escalated quickly this time. From a raid by Israeli armed forces in Al-Aqsa Mosque in the occupied Old City on Monday morning to rocket attacks from and airstrikes on Gaza in the evening. At least 35 Palestinians, including militants and 12 children, were killed in Israeli strikes on Gaza, while the rocket and anti-tank missile attacks from Gaza killed five civilians in Israel, including one Indian woman. It is too early to say which side the conflict would turn. But one thing is certain: that this is the most dangerous escalation since the 2014 war on Gaza. Since the beginning of Ramzan last month, Israel, faced with political instability at home, has been using force to prevent Palestinian movement and gatherings in East Jerusalem. But did it expect its use of force in Jerusalem would take the country to the brink of a full-scale war with HamasRead

For Hamas, the Islamist militant group that runs Gaza, the Jerusalem conflict unfolded at a critical time. The coastal strip, under Israeli blockade for years, faces mounting economic challenges. Earlier when Hamas was the resistance movement, it could blame both the occupation and Palestine’s political leadership for the day-to-day miseries of Palestinians. But now, Hamas has been in charge of Gaza since 2007 and both its governance faces criticism from within. Hamas also largely stayed away from directly provoking Israel in the past seven years, while smaller militant groups fired rockets occasionally. This also led other Islamist groups challenging Hamas’s commitment to “resistance”.

In the larger Palestinian political theatre, the struggle for leadership between Fatah, which runs the Palestinian Authority (PA) in the West Bank, and Hamas has never been settled. Hamas wants to emerge the main force in the political spectrum. In January, the PA, headed by President Mahmoud Abbas, had called for parliamentary elections in the occupied territories — the first poll in 15 years. Fatah, faced with infighting and allegations of corruption and incompetence, was expected to do poorly in the election, scheduled for May 22, while Hamas was prepared to play a bigger role post the polls. In late April, Mr. Abbas announced that he was delaying the elections indefinitely. While he blamed Israel for his decision, the end result is that the status quo — Fatah in charge of the PA and Hamas in Gaza — would continue. An angry Hamas called Mr. Abbas’s decision “a coup”.

There is also widespread anger against the way Israel treats Palestinians in East Jerusalem and the tightening of the occupation. Mr. Abbas, 85, seemed unable to counter Israeli measures. His decision to resume the PA-Israel security cooperation in January was also unpopular. Hamas termed the move “a stab in the back of efforts toward building a national partnership”. So, when Israeli troops raided Al-Aqsa and protests were spreading in East Jerusalem against the eviction of dozens of Palestinians from their houses, Hamas seized on the moment. Immediately after the Monday’s clashes, Hamas issued an ultimatum to Israel to remove all security personnel from the Al-Aqsa area and all settlers from Sheikh Jarrah in East Jerusalem where the Arab families face eviction. The ultimatum itself was a warning because both Hamas and Israel knew that the demands were not going to be met. By the evening, the militants started firing rockets, targeting southern Israel and even western Jerusalem. Its codename for the operation: Sword of Jerusalem. Clearly, it wants to project itself as a protector of Jerusalem and the only force that can stand up to Israel and thereby consolidate its position among the Palestinians.

It also lets Hamas tell the world that the Israel-Palestine conflict remains the centre of West Asia’s politics. When the so-called Abraham Accords were signed between four Arab countries — the UAE, Bahrain, Sudan and Morocco — and Israel last year, then U.S. President Donald Trump called it “a new dawn in the Middle East” that would “serve as the foundation for a comprehensive peace across the entire region”. As the Palestinians rejected Mr. Trump’s peace plan, his administration went ahead, sidestepping the Palestine question, to facilitate normalisation agreements between Arab countries and Israel. In less than one year, West Asia is on fire. Sidestepping the Palestine question does not resolve the Palestine question.

Israel has vowed to intensify its airstrikes on Gaza. It is capable of carrying out deadly attacks, levelling Gaza’s infrastructure and inflicting heavy losses on Hamas and other militant groups. But this is not a war between two conventional forces. Israel is West Asia’s strongest military power and Hamas is a ragtag militia with short and medium-range rockets that has been caged in a 365-square-km strip. Israel cannot be satisfied with anything less than a decisive victory. That is Israel’s Achilles heel. It is also vulnerable to Hamas’s rocket attacks that target its cities and citizens.

There is a main difference in the way Hamas fired rockets this time and in 2014. During the 2014 war, it fired almost 4,000 rockets over 50 days, and most of them were intercepted by Israel’s rocket defence system. This time, Hamas launched about 850 rockets in the first two days — hundreds of them within minutes — piercing through the Iron Dom defence umbrella. If in 2014, six civilians were killed in seven weeks, Hamas rockets have killed five civilians in the first 24 hours this time, an indicator of what is to come both for Israelis and Gazans. It is not sure whether Israel anticipated Hamas to escalate the Jerusalem tensions to an open conflict. But Hamas, given the way it is firing rockets, seems to be prepared for this moment.