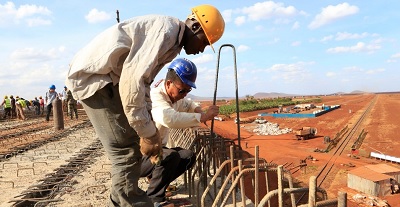 For a few years now, the Chinese government have been lending billions of US dollars to help African countries in their infrastructure building projects. According to a report by the World Bank, 18 countries are currently at “high risk of debt distress”. These African countries show no apparent capacity to repay their debt but China is still lending, thereby increasing its influence on the continent.

Why are Chinese’s loans so loved by African leaders?

Asking why African leaders have developed such a sharp taste for Chinese debt is a relevant question. Reportedly, getting loans from institutions like the IMF, the World Bank and Paris Club is considered slow and burdensome. The Chinese, however, seem to attach fewer conditions to their loans, which are relatively less burdensome.

Furthermore, the current state of these borrowing countries shows a high demand of infrastructure project, modernization of transport, etc. As such China’s offer is irresistible. But the long-term consequences can be quite unbearable.

Furthermore, one of the reasons that makes China’s offer so irresistible to African countries is that these easy loans meet the high demand of the developing nations for infrastructure projects, modernization of transport, etc. With these loans, they also launch various programs to lend money in order to help start and improve local business. However, in case China stops lending, access to loans for local business is still possible on platforms like Moneybanker.fr.

Is china helping or tying Africa up ?

According to a 2015 report presented by the China-Africa Research Initiative (CARI), 17 African countries are said to be potentially unable to repay their loans. Among them are Zambia, Djibouti who, according to the 2017 figures, owe respectively about 75% and 77% of their external debt to China.

As for now, 18 African countries are considered to be at “high risk of debt distress”. Their debt-to- GDP ratios have exceeded 50%. It makes no doubt that these nations will have a hard time repaying their debts. And the Chinese government must be aware of that fact. So what is the goal behind? What are their real motives for lending so much to poor countries?

What is the real motive behind the Chinese loans?

After the unforgettable episodes with Europeans countries, Africa is now playing a new scenario of excessive loans with China. The figures are daunting. Africa currently owes about 417 US dollars to China. And to add to the surprise, about 67 USD will still be invested in this year 2019.

Though the projects which call for such loans are capital to the development of those countries, there are reasons to think that Africa is diving into a sea of debt and will, soon enough drown.

Rex Tillerson, former US Secretary of State asserted that these loans to Africa not only “encouraged dependency” and “endangered its natural resources”. China is expanding its influence of the continent. Very soon, they will have a total control on the raw materials, on the major economic deals etc. Not only will that endanger the European influence, but it is decreasing Africa’s future power of negotiation.