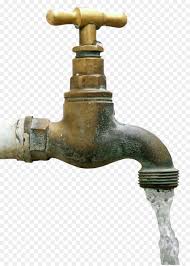 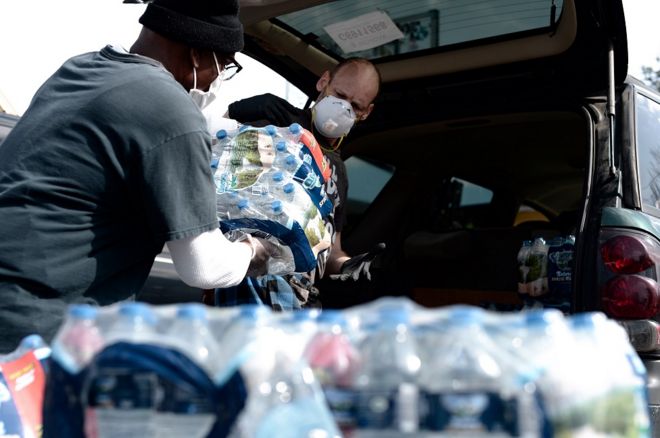 Unlike in many European countries where it is illegal, US households have the water connection turned off for non-payment of bills.

Unlike in many European countries where it is illegal, US households have the water connection turned off for non-payment of bills.

That has left many Americans without water at a time when they are being told that one of the most important things they can do is wash their hands.

“I have been without water for about six months now,” says Akiva Durr.

A mother of two girls, she lives in one of the most deprived neighbourhoods not just of Detroit, but of the entire country.

“This time has been very stressful, but I did make my own sanitiser,” says Akiva, adding that she has been using aloe vera gel and alcohol as a makeshift way to try to protect her children from the virus.

Before the pandemic, Akiva was collecting water from neighbours and friends to bathe her children.

“I’d give them a bath every other day, or do a sponge bath to save water,” she tells me. “It’s depressing.”

Now even visiting neighbours has become difficult, and that is not the only way life has been made much more difficult during this time for those without water.

“Most people whose water is turned off look just like you and I,” says Reverend Roslyn Bouier.

“They (usually) go to work every day and their kids go to school,” she says. “That means they could use toilets away from home, find ways to drink water, or be able to wash their hands.”

“Now because of ‘shelter in place’, people are confined to their homes with no water so they can’t use the restroom while they are out and about, they have to throw their waste in the garbage.”

Reverend Bouier is director of the Brightmoor Connection Food Pantry in Detroit. It distributes food to those in need, but in recent years has become heavily focused on getting water to households that have been disconnected.

Although it is a national phenomenon, with 15 millions American households estimated to face shut-offs annually, Detroit has received attention because of the large numbers of disconnections there.

Even though it is a city with high levels of poverty and unemployment, it has comparatively high water rates.

“The highest proportion of shut-offs is among black women. Women of colour with babies,” says Reverend Bouier, explaining the massive impact that has not just on the health but on the dignity of those affected.

“I have a client whose water’s off, who has her grandchildren and children with her, a total of 11 people in the home, and the water’s off.

“She called me to say that her daughter had all the [coronavirus] symptoms so she couldn’t come to collect water but she didn’t want me to drop off water because she was embarrassed that the smell coming from her house was so bad.”

Reverend Bouier says Detroit is seeing the highest number of coronavirus cases in areas in which there are the most households with the water shut off.

Even this week, she and her volunteers have been hard at work at the food pantry loading up cars with water for those who still have their water disconnected.

That is several weeks after the City of Detroit promised to reconnect everyone’s water during the Covid19 crisis.

The head of the city’s Department of Water, Gary Brown, says they have identified thousands of households that need the water reconnected.

“Every person in the city of Detroit has an opportunity not to see an interruption in supply, but they have to ask for help and be a willing participant,” he says, saying the city has been trying to encourage people to come forward if they are among those affected.

Asked about the ethics of turning off someone’s water in the first place, something the UN considers a basic human right, Mr Brown says that at least no one in his city is being evicted over non-payment.

“Unlike other US cities, no Detroiter is going to lose their home because they are behind in their water bill,” he says.

“Ninety-two per cent of people here are paying their bills on time. I’m not saying that 8% isn’t a big number, it’s somewhere between 18 and 20 thousand people that are struggling.”

Many cities across the United States have made no commitment at all to reconnect the water to households during this crisis. Some water departments have not even promised to stop new disconnections for non-payment.

This all leaves many of the poorest Americans without water, unable to follow the principal public health message in this crisis and potentially at the mercy of the virus.

Detroit’s water department has now promised to reconnect Akiva’s water, though for now she has resorted to taking her children to temporarily stay with a friend