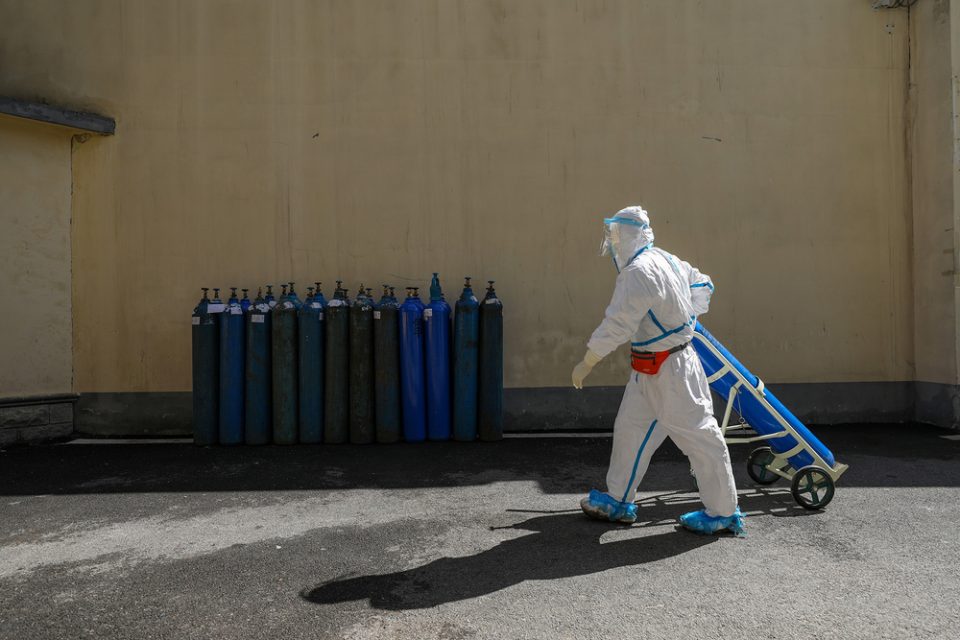 The most common diagnosis in severe COVID-19 patients is extreme pneumonia, with most critical cases requiring mechanical ventilation, according to guidelines drawn up by the World Health Organisation for clinical management of coronavirus.

Medical oxygen is what flows through the ventilators that breathe for critically ill patients – another key piece of equipment that’s scarce across Africa.

The limited availability of oxygen in hospitals is a result of funding, politics, and supply chains that have all led to the neglect of production and distribution of the vital gas – especially for regional and lower-tier hospitals outside of capital cities.

A 2018 study by the Clinton Health Access Initiative surveyed 78 hospitals across three states in Nigeria and found that only two percent had pulse oximeters, which measures the content of the gas in the blood – crucial information for administering oxygen therapy.

In Ethiopia, the authors found that only 14 percent of the hospitals studied had standard operating procedures on oxygen use or healthcare workers trained in oxygen therapy, and only 41 percent had biomedical engineers and technicians who could maintain oxygen equipment. 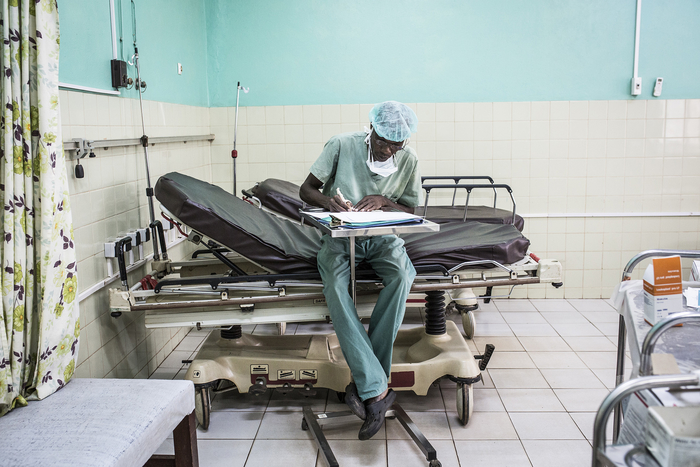 Virginie Nguyen Hoang/ICRC
A doctor does administrative work after an operation in a hospital in Bangui, Central African Republic. Deficiencies in healthcare include equipment shortages.

This deficit exists even as respiratory infections kill more people in Africa than HIV/AIDS, tuberculosis, and malaria – and almost one in five children before the age of five, according to a 2016 WHO report.

“Nobody has had their eyes on pneumonia, even though the data has been telling us that it is a massive killer in Africa,” said Leith Greenslade of JustActions, a development organisation that has campaigned for greater investment in pneumonia treatment in the so-called Global South of low- and middle-income countries.

“And now, when a pneumonia pandemic [coronavirus] arrives, Africa could not be more vulnerable because of decades of underinvestment in pneumonia control,” Greenslade told The New Humanitarian.

The reason for the lack of oxygen in many countries is two-fold, said Bernard Olayo, a physician and the founder of Hewatele, a Kenyan social enterprise that manufactures and distributes medical oxygen.

The first problem is policy, Olayo said. It was only in 2017, after lobbying from hundreds of organisations, that the WHO finally included oxygen on its List of Essential Medicines, even though it is key in providing safe surgery, anaesthesia and obstetric care.

“And now, when a pneumonia pandemic [coronavirus] arrives, Africa could not be more vulnerable because of decades of underinvestment in pneumonia control.”

Until oxygen was listed as essential by the WHO, it was difficult for countries to justify funding for oxygen therapy, especially at smaller regional facilities.

The second problem, according to Olayo, is the lack of capacity and resources on the part of many governments to manage and maintain local oxygen production – which requires highly technical knowledge.

Since building its first oxygen plant in 2014, Hewatele has partnered with the Kenyan Ministry of Health. It now produces oxygen gas in cylinders within 100 kilometres of all the health facilities they serve.

As a result of competition in the Kenyan market, oxygen prices have fallen by as much as 50 percent.

But that is not the case for other countries. In Garowe, Somalia, for example, 6.8 cubic metres of oxygen – enough to sustain one adult for 24 hours – costs over $100. In Kenya, the price would be $15. “It’s an extremely rare commodity there,” said Olayo.

Many hospitals in countries without a reliable oxygen supply – as well as medical centres in humanitarian and military settings – rely on oxygen concentrators, which remove nitrogen from the air rather than drawing from an oxygen cylinder. However, while gas cylinders can serve an entire ward of patients, one oxygen concentrator can only serve a single patient, and they are also prone to breaking down.

Ethiopia and Nigeria are the only two African countries to have national oxygen policy roadmaps, which include plans for large-scale oxygen production.

As part of that rollout, Ethiopia inaugurated the Amhara Oxygen Centre in April 2019, capable of producing medical oxygen for 40 hospitals.

But upping production across the continent will take years, which could be too late for many people. As of 16 April, there were close to 17,500 confirmed coronavirus cases in Africa – affecting every country apart from Comoros and Lesotho – and almost 1,000 deaths.

A statistical study modelling COVID-19’s spread in Africa, released in pre-print but not yet peer-reviewed, has projected that nearly every country is likely to have 1,000 reported cases by the end of April and to surpass 10,000 cases within another few weeks.

The authors, from the London School of Hygiene and Tropical Medicine and the South African Centre for Epidemiological Modelling and Analysis, wrote that these patterns were consistent across the continent and that true numbers of cases would almost certainly be higher than reported figures.

About 14 percent of all COVID-19 cases will require some oxygen therapy and around five percent will require intensive care unit treatment, administered through an “ICU bed”, which includes a ventilator, suction machine, monitoring, and trained personnel.

In African countries, the lack of available ICU beds is alarming – on top of all the other pressing deficiencies in healthcare.

The scramble for ICU equipment by African governments is happening at the same time that US and European companies are also under pressure from their own governments to supply them first.

“What’s different about this crisis is that never before have we had America and Europe demanding these products at the same time as Africa has needed them,” said Greenslade. “Whatever is going to be left will go to Africa, and that really worries me.”April Zhu

Freelance journalist based in Nairobi, Kenya, reporting on gender, urban inequality, and the Chinese diaspora in East Africa.