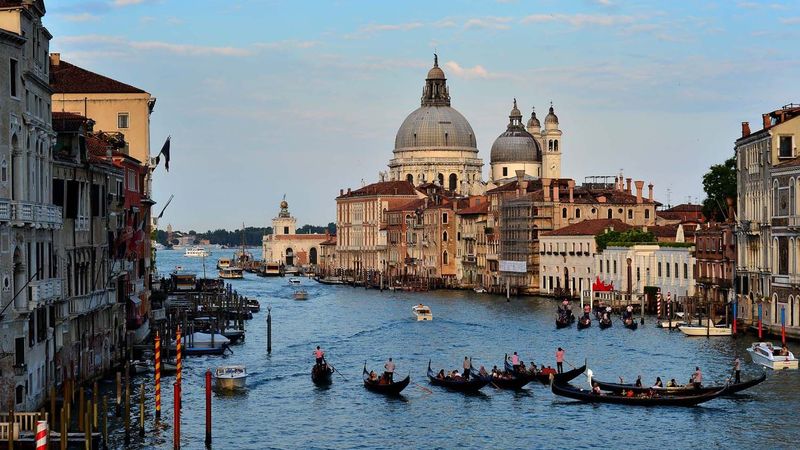 Much of Venice was underwater on Wednesday after the highest tide in 50 years ripped through the historic Italian city, beaching gondolas, trashing hotels and sending tourists fleeing through rapidly rising waters.

Officials blamed climate change while shopkeepers on the Grand Canal raged against those who have failed to protect the Unesco city from the high tide.

They said corruption had repeatedly delayed a barrier protection system which could have prevented the disaster.

“The city is on its knees,” Venice mayor Luigi Brugnaro said in an interview with national broadcaster RAI.

“There’s widespread devastation,” he said in the famed St. Mark’s Square, which bore the brunt of the flooding. “In all likelihood the damage from last night runs into hundreds of millions of euros”.

Tourists lugging heavy suitcases waded in thigh-high galoshes or barefoot through the submerged alleys, as water taxi and gondola drivers baled sewage-tainted water out of their trashed vessels.

A 78-year old was killed by electric shock as the waters poured into his home.

“We ask the government to help us, the costs will be high,” Brugnaro tweeted.
“These are the effects of climate change.”

“This is what is happening more and more often in the Mediterranean,” Costa said on Facebook, referring to

“Global warming will destroy our planet if we do not immediately reverse the direction.”

The exceptionally intense “acqua alta,” or high waters, peaked at 1.87 metres (six feet). Only once since records began in 1923 has the water crept even higher, reaching 1.94 metres in 1966.

“It was unbelievable, the water rose so quickly,” said resident Tiziano Collarin, 59, as he surveyed the damage.

“Windows were blown out, there are those who have lost everything,” he said as the flood alarm rang out to warn those in the canal city that the tide, which had receded somewhat overnight, was coming in once again.

The fire brigade said it had carried out over 400 operations as well as laying on extra boats as water ambulances.

Around 160 fire fighters were deployed to rescue people stranded on jetties and to recover boats broken free from their moorings.

President of the Veneto region Luca Zaia said 80 percent of the city had been submerged, causing “unimaginable damage”.

She said she feared ,like many people, that climate change “will get worse and at some point Venice will drown”.

A massive infrastructure project called MOSE has been underway since 2003 to protect the city, but it has been plagued by cost overruns, corruption scandals and delays.

The plan involves 78 gates that can be raised to protect Venice’s lagoon during high tides — but a recent attempt to test part of the barrier caused worrying vibrations and engineers discovered parts had rusted.

“They’ve done nothing, neglected it. It doesn’t work and they have stolen six billion euros. The politicians should all be put in jail,” said local Dino Perzolla, 62.

St. Mark’s Square in one of the lowest parts of the city was particularly affected, its vestibule inundated with water.

“It was apocalyptic, enough to give you goosebumps,” said Marina Vector, as she and her husband used buckets to scoop water out of their shop selling Venetian festival masks.

“The storm was so bad it broke the marble flood barrier out front. Nothing’s survived,” she said.

Tables and chairs set out for aperitifs bobbed outside bedraggled luxury hotels, where people of all ages seeking safety from the storm late Tuesday had been forced to climb in through windows after gangways washed away.

“I’ve never seen anything like it in my life. There was a terrifying wind, it was a hurricane. It was horrible,” said local Cristina, as she fought back tears.