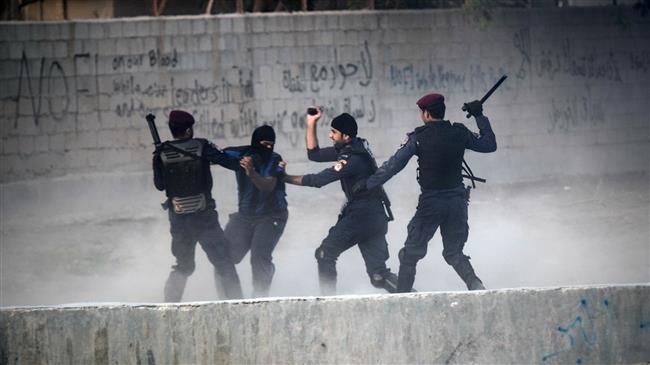 In this file picture, Bahraini regime forces arrest a protester during a demonstration against the ruling Al Khalifah regime in the village of Shakhura, west of the capital Manama. (Photo by AFP)

More than a dozen British lawmakers have called on the UK government to “reconsider its relationship with Bahrain” to pressure the Al Khalifah regime into releasing political prisoners as a heavy-handed crackdown on pro-democracy activists persists in the tiny Persian Gulf kingdom.

In a letter sent to UK Foreign Secretary Dominic Raab earlier this week, 14 parliamentarians criticized the government for continuing to support the Manama regime despite the fact that its record on human rights has been described as dismal.

“Ahead of the 10th anniversary of the arrest of political leaders and activists in Bahrain for their participation in pro-democracy protests, we, the undersigned, are writing to draw your attention once again to the ongoing suppression of democracy and political opposition in Bahrain,” the letter, composed by Labor Party politician Zarah Sultana, read.

Bahrain’s police have beaten children and threatened them with rape during popular uprising’s anniversary.

The letter noted that seven prominent Bahraini opposition leaders, including Hassan Mushaima, Abdelwahab Hussain, and Abdulhadi al-Khawaja, were arrested on March 17, 2011, and later sentenced to life imprisonment on trumped-up charges of communicating with foreign countries and inciting murder and destruction of properties.

The legislators urged the UK government “to disengage from blind support of those who abuse civil society for the mere expression of opinion.”

The letter asked the government to follow its mission statement on Bahrain, to “help Bahrain to return to a stable and reformist state with a good human rights record.”

The British lawmakers called for the immediate and unconditional release of Bahraini political prisoners.

They also demanded reconsidering relationship with Bahrain, as a country of concern, until the demands of the Bahraini people are adequately met.

The news comes as leaked documents indicate that Raab has stated that the UK will pursue trade deals with countries irrespective of their poor human rights records.

Raab said he hoped establishing and maintaining trade links with such countries would act as a “positive influence” on their human rights records.

“We don’t junk whole relationships because we’ve got issues – we have a conversation because we want to change the behavior,” Raab said according to leaked audio from a video call.

The European Parliament urges Bahrain to stop its blatant and deadly violations of human rights campaigners and prisoners of conscience.

Last week the European Union Parliament voted by an overwhelming majority to condemn human rights violations in Bahrain, where the death penalty is retained for a wide range of offences.

The parliament called on Bahrain to quickly halt the imminent execution of 26 death row prisoners and condemned the ongoing use of torture against detainees and the persecution of human rights defenders.

“[Members of the European Parliament] are deeply concerned that ten years after the Bahraini ‘Arab Spring’ uprising, in 2011, the human rights situation in the country continues to worsen,” it said in a statement.

Bahrain’s most prominent Shia cleric Sheikh Isa Qassim has warned about the death of political dissidents in the Manama regime’s prisons and demanded their immediate release, stressing that their confinement would lead to instability in the Arab country.

On March 14, 2011, troops from Saudi Arabia and the United Arab Emirates were deployed to assist Bahrain in its crackdown.