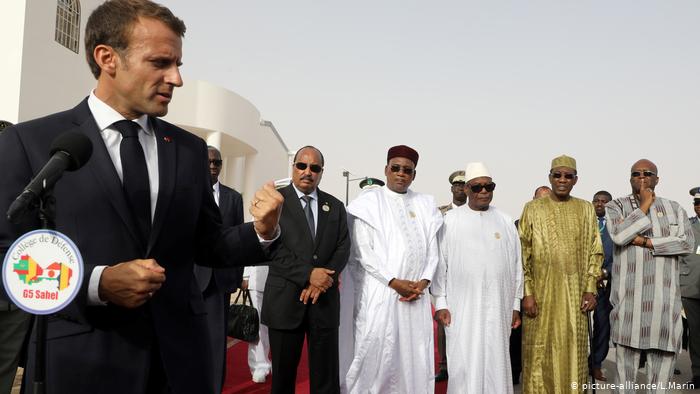 Despite the ongoing presence of French troops in the troubled Sahel region, violent attacks against civilians and security forces are still commonplace. So why isn’t the situation improving?

he meeting was supposed to take place later this month in order to address France’s ongoing military presence in the region and the ongoing fight against extremist groups including Boko Haram.

Despite ongoing efforts by French security forces since 2013, the security situation in the Sahel region has remained poor. Thousands of civilians and soldiers have been killed after armed Islamists first revolted in northern Mali in 2012. The conflict quickly spread to neighboring countries, prompting the creation of the anti-jihadist task force known as the G5 in 2014, which includes Burkina Faso, Chad, Mali, Mauritania and Niger

Although France remains the only Western country with a significant military presence in the Sahel, France’s relationship with its former African colonies has grown increasingly tense in recent months. This has led to an evident increase in anti-French sentiment.

“There is indeed [a clear rise in anti-French sentiment in West Africa],” Dakar-based independent reporter, Bram Posthumus, told DW. “When Operation Serval began in 2013 to dislodge the jihadists, who were then occupying all the major urban centers in the north of Mali, it was thought it would be a problem that would be quickly resolved. They did chase out the jihadists, although they did not chase

The ongoing Operation Barkhane was launched in 2014 by then-President Francois Hollande, with 3,000 soldiers deployed to the member states of the G5 Sahel. Prior to this, Operation Serval was carried out in Mali from January 2013 to July 2014 with the aim of ousting Islamic militants from the country, although it would only turn out to be successful in the short-term. After so many years of failed military efforts, Posthumus says citizens in the region are beginning to grow suspicious of France’s reasons for being there.
“So that’s when the conspiracy theories get going: Either they’re there because of the supposed mineral riches in the north of Mali, or they think it’s just a neocolonialist project to make sure that they remain part of France’s backyard,” he says.

Earlier this month, Macron responded to the rise in anti-French sentiment, urging G5 Sahel leaders to address the issue if they wanted France to continue its military operations against Islamist militants.

“I can’t have — and I don’t want to have — troops on the ground in the Sahel where there is ambiguity [on the part of local authorities] towards anti-French movements, and sometimes

[critical] comments made by politicians and ministers,” Macron told reporters during a press conference on December 4 during the NATO summit in London.”

A convocation or invitation?

Since his election in 2017, Macron has made it clear he wishes to increase France’s military involvement in the region. A total of 4,500 troops are currently stationed on the ground in Chad, Mali and Niger. His decision to invite G5 Sahel country leaders to discuss the security situation in the Sahel region was seen by some as a positive step towards easing tensions. But not everyone is convinced of Macron’s good intentions, Posthumus explains.

“The big debate has been: Did [Macron] invite these five presidents, or did he send a convocation? This sounds like semantics but it’s actually very important. Because if it is an invitation, [the talks will be] on the basis of equality. Otherwise, it seems as if these presidents were going to be lectured and harangued by Macron and that will make anti-French sentiment even worse because it will be seen as a public humiliation of five heads of state in the Sahel region.”

But amid the rising suspicions of France’s intentions in the Sahel and its treatment of G5 leaders, Posthumus says many of the region’s more vulnerable communities welcome any strong international presence.

“In areas where the state has been absent for a very long time, obviously anyone who comes in is welcome, if they say they can guarantee safety and security,” he says. “Although there is a body of opinion that thinks any foreign troop presence in a country is making the situation worse because it doesn’t repel extremists, it actually attracts them. The groups who are carrying out the attacks are getting more daring and not only taking on the soft civilian targets like they used to.”

The latest jihadist attack on a Niger military camp in the western Tillaberi region — which has been described as the worst of its kind in Niger in living memory — came as a further blow to efforts to roll back the spread of jihadism in the Sahel.

According to the the Defense Ministry, the attack was carried out by “heavily armed terrorists estimated to number many hundreds.”

“It was a surprise attack and you know how [the jihadists] act,” Niger’s minister of defense, Issoufou Katambe, told DW. “We will take stock of the situation to find out exactly what happened before answering [more detailed] questions.”

drove to the military base in a clearly visible, long convoy of vehicles — the minister responded briefly, saying authorities were still investigating the circumstances.

“I don’t think the jihadists knew our weaknesses…there were many of them, with tanks and lots of other materials. It was a surprise attack.”