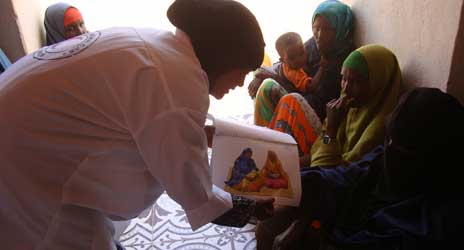 Motherhood can be a dangerous enterprise in Somalia, where almost three decades of conflict have left the health system in tatters.

Over a Somali woman’s lifetime, she will face 1/18 chance of dying from causes related to pregnancy or childbirth – the second highest lifetime maternal death risk in the world. The situation is grim for children, as well: Somalia has the world’s fourth highest child mortality rate.

Even though Lot of organisations and the Somali government provide technical and financial supporting towards the establishment of maternity  service, but still the death rate is very high, 1300per 100,000 for the base line according to unicef report.

One of the major reasons of this high mortality rate is that most of the Somali woman did not get or go the Antenatal care.  The antenatal care (ANC) consist of four visits providing essential evidence based interventions – a package often called focused antenatal care – are required. Essential interventions in ANC include identification and management of obstetric complications such as preeclampsia, tetanus toxoid immunisation, intermittent preventive treatment for malaria during pregnancy, and identification and management of infections including HIV,syphilis and other sexually transmitted infections (STIs).

Less than 27% of Somali woman have access to the antenatal care services,

Lack of enough facilities, perception of the Somali woman about the modern health care and about the taking as normal the pregnancy are the major reason Somali women did not get or use this service. Lot of health education and the increasing of awareness will be very important to improve the understadning of the antenatal care serives,  meeting with skilled health providers  can help the mother to understand themes in the literature that tie these diverse experiences together include: concerns about pregnancy and childbirth; fear of caesarean births; impact of female circumcision on childbirth; and resistance to family planning

Most of the women whom come  our Dr Hawa Abdi hospital less than 12% attended ANC, and less than 15% understand what is the service is.

Alll the actors involving Somali women health service need to do ,more efforts, in terms of information’s and making available the ANC service so lot of Somali women and child can be save.