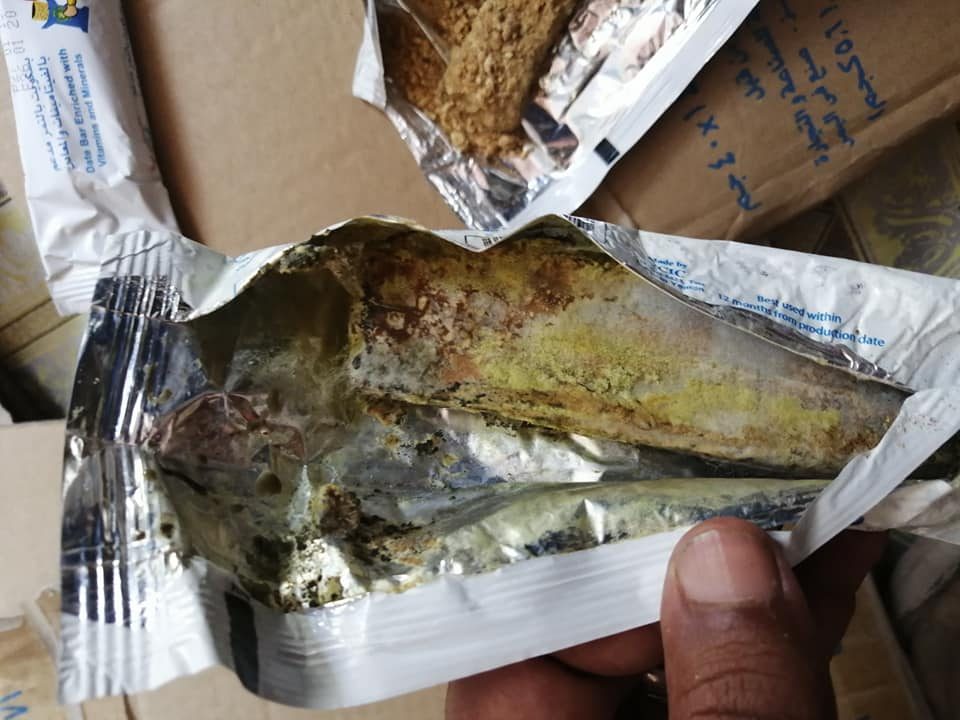 Wafaa Walid is a nine-year-old girl studying in primary class in the Al-Shimayateen district of Yemen’s Taiz – her father Walid works as a builder and finds it difficult to provide his six children with basic commodities.

Walid cannot afford to give his children pocket money at the school to buy sandwiches so his children were happy to receive date bars supplied by the the UN’s food assistance agency, World Food Programme (WFP).

Operating through the School Feeding Programme, the WFP started to distribute the date bars to students in Taiz’s schools last year, a move that was welcomed by children, teachers and guardians.

“My father does not provide us with money and I used to have to wait until I returned home at noon to have lunch,” Wafaa told Middle East Eye.

“The school principal started last year to provide us with two date bars every day and that is enough for me to get full and resume my classes actively.”

The WFP currently distributes date bars for 665,000 children in more than 1,500 schools. From January 2020, the organisation will reach 1.2 million children around Yemen, the WFP says.

The students are in need of something to eat at school so they do not hesitate to eat the date bars even if they suspect they might not be fresh.

“Usually the date bars are good but the unlucky students receive rotten date bars, which become black with a bad smell and sometimes there are weevils inside them,” said Wafaa.

“When I receive a rotten date bar, I throw it in the rubbish but when I receive a good one I eat it. Recently, many of us were unlucky and we received rotten ones.”

‘I hope that the WFP opens an investigation’

Yemen’s civil war has been ongoing since 2015, with Houthi rebels battling Yemen’s government who are supported by a Saudi-led coalition.

An estimated 80 percent of the population, 24 million people, require some form of humanitarian or protection assistance, including 14.3 million who are in acute need, according to the UN Office for the Coordination of Humanitarian Affairs (OCHA).

Mohammed Aidarous, a school principal in Taiz, confirmed that some of the date bars supplied to schools are good and others are inedible, stating that good and bad date bars can be found in the same carton.

“We know there are rotten date bars and we advise students not to eat them but we cannot decide which are rotten or valid until we open it,” Aidarous told MEE.

He said the students are happy with the date bars and they can identify the bad ones and throw them in the rubbish.

Aidarous also said that this was not the first time that the WFP had provided them with rotten bars.

“Last year we received mixed rotten and valid date bars and we distributed most of the ok ones to students and then teams from the WFP withdrew the rest of the date bars from schools,” Aidarous said.

“This year the WFP did not withdraw anything yet.

‘I thought that school is supposed to be the safest place for them, but unfortunately you can see that the school became a source of danger for our children’

The expiry date of the bars was January 2020 which was why some of the school principals had accepted the date bars from the WFP, but some were found to be rotten before the expiry date.

Aidarous said: “I checked the expiry date and checked some date bars before receiving them from the School Feeding Programme and they were good but then I found the quality to be mixed.”

He stated that neither the WFP nor the School Feeding Programme had told them to stop the distribution, confirming that they had told the education office in Taiz about the rotten date bars.

The principal made a decision to halt the distribution of the date bars, and called on the UN agency to open an investigation.

The WFP told MEE on Tuesday that upon being informed of the issue in early November, the agency stopped its school feeding programme as a precaution and launched an investigation.

“Our preliminary findings suggest the problem lies with the packaging of the date bars,” the spokesperson said, adding that WFP is now recalling the date bars and will soon start delivering “fresh stock from different production batches”.

‘School is supposed to be the safest place’

Wafaa’s father Walid told MEE that he did not know about the rotten date bars and only recently heard the news from the media after which he checked them himself.

“I asked Wafaa to bring me one of the date bars she receives from the school and then I found it was out of date and its smell was very bad,” said Walid.

“Then, I asked my children not to eat those rotten date bars. It is better for my children to stay hungry than eating bars that may affect their health.”

Wafaa’s father was angry with the management of the school and the teachers as he says they knew about the rotten bars but did not stop distributing them to students.

“I thought that teachers care about our children and that school is supposed to be the safest place for them, but unfortunately you can see that the school became a source of danger for our children,” said Walid.

“I hope that authorities force schools to stop distributing such rotten food to our children as they are still minors and they may eat anything.”

Abubakr al-Silwi, a doctor in Taiz city, said that the rotten date bars may cause negative effects to the students as they had lost their nutritional value.

“If there are some quantities that are rotten that is a clear indication that all of them are invalid as they were produced at the same time and were put in the same carton,” Silwi told MEE.

“This is happening for the second time in Taiz and that means there is no observation over the food from the WFP in Taiz so I hope that the WFP withdraws all of the rotten ones.”

Silwi also called on school principals to stop distributing the date bars and to refuse to accept any future quantities of rotten date bars.

Abdulaziz al-Shaibani, the manager of schools in Taiz’s Al-Shimayateen district, also said that the WFP was providing schools with rotten date bars for the second year running, stating that he had directed school principals in his district to stop distributing the bars.

The problem isn’t just date bars: not far from the schools who received them, rotten wheat flour has been provided by the WFP to schools in Taiz’s Al-Mawaset district, where people are demanding the WFP take the flour away.

Ahmed al-Hammadi, a resident of Al-Mawaset district, told MEE: “When a truck from the WFP arrives in our district we think that we will receive decent food but unfortunately we receive rotten food.

“I hope that the WFP stops sending its rubbish to Taiz as we are human beings and not animals to eat rotten food.”

Hammadi did not only blame the WFP but also authorities in Taiz for the situation as he says they are prepared to receive anything from international organisations without checking it.

Since the date bars were produced by a local factory in Taiz province, Hammadi believes it should be easy for authorities to check and distribute them within the valid period.

Back in Al-Shimayateen, Wafaa hopes that she will receive good date bars from now on.

“When I receive a rotten date bar the school principal declines to replace it for me so I hope all students can receive good bars every day,” she said