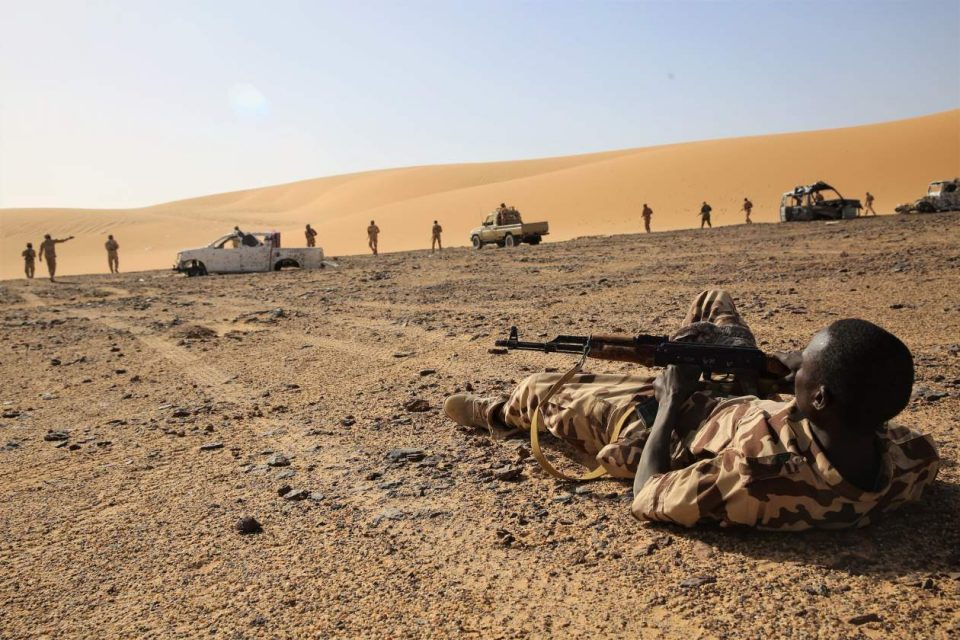 Africa doesn’t matter militarily to America. No doubt, a “secure and stable” Africa would be welcome and thus an “interest,” but it is not an important one. Nor is it attainable, at least at a reasonable cost.

For Washington’s foreign policy establishment, no nation is too unimportant to be considered vital to America’s security. No territory is too insignificant for the United States to dominate. No spot on earth is too distant to station an American soldier. How else to judge the hysterical criticism of the Trump administration’s proposed military drawdown in Africa?

Despite the fiscal crisis, strategic overreach, endless war, and political division, “the Blob,” as Washington’s foreign policy community is known, refuses to consider a world where Uncle Sam does not treat every region and nation as his personal sphere of interest. Washington is determined to protect more than a score of rich allies in Europe, multiple wealthy clients in Asia, and a gaggle of Middle Eastern nations.
Report Advertisement

Could the Pentagon at least draw down its forces in Africa? Reduce the number of American personnel stationed there? The Blob says no.

Roughly seven thousand American personnel are stationed across Africa, primarily in Djibouti, Niger, and Somalia. Defense Secretary Mark Esper is considering rebalancing U.S. defense resources, shifting toward containment—not that he has used that word—of China and Russia. To advance that process, last fall the Pentagon asked each regional command for its resource needs. Explained Esper: “We’ve begun a review process where I’m looking at every theater, understanding what the requirements are that we set out for, making sure we’re as efficient as possible with our forces.”

The 2018 National Defense Strategy sought to prioritize potential great-power conflict over counterterrorism and whatever else the Pentagon currently does, such as extended and fruitless nation-building. America’s comparative advantage is thwarting major threats by major states. However, the actual need for Washington to take on that role is less clear.

Russia barely qualifies as a threat. Its nuclear weapons are enough to deter America but insufficient to contend for global control, as did the Soviet Union during the Cold War. Moscow is powerful enough to beat up on its smaller neighbors, such as Georgia and Ukraine, and intervene in small regional firefights, such as Syria, but not able to dominate a continent, either Asia or Europe. Why, then, seventy-five years after the end of World War II, are Europeans not expected to defend themselves?

China appears more threatening but not to the United States. Beijing will not be launching a naval armada to conquer Hawaii and invade the West Coast. The bilateral contest is over American military superiority along China’s coast. It is a convenient capability to possess but not essential. Maintaining that dominance will become ever more expensive to maintain: it will always be cheaper for the Chinese military to sink a U.S. carrier than for the United States to build and protect one. Washington would not stand still if the People’s Republic of China (PRC) extended its control up to America’s borders. The PRC will not rest until it is capable of deterring U.S. intervention.

Washington has an interest in the preservation of the independence of states in East Asia, but that is best accomplished by backing up nations that create their own deterrents to Chinese adventurism. Beijing can certainly make American intervention more costly, but its neighbors can make any Chinese aggression more expensive. The PRC’s assertive activities have created significant blowback such as Japan steadily expanding its military activities, the Philippines welcoming Tokyo’s increased military role, Vietnam putting security before ideology and confronting the PRC, Indonesia rejecting Beijing’s expansive territorial claims, and India being welcomed into the region. There’s no need for America to be on the frontlines.

Still, it makes sense to treat China and Russia as greater security issues than Syria and Afghanistan. The former two theoretically could do America significant harm and pose far more significant challenges than the latter two. Dispersing U.S. manpower and materiel around the globe to fight “endless wars” dissipates America’s strength. Russia, and especially China, have been far more circumspect in wasting valuable resources in stupid, unnecessary wars.

It is unsurprising, then, that the Pentagon wants to redirect resources. However, the reaction, especially on Capitol Hill, has been barely suppressed horror. How could the administration leave any spot on earth without an American garrison? Doesn’t the president realize there are bad people in Africa? Sen. James Inhofe (R-OK), chairman of the Senate Armed Services Committee, made the usual extreme but vacuous claims: Any drawdown of our troops would be shortsighted, could cripple Africom’s ability to execute its mission and, as a result, would harm national security.

But what are America’s alleged interests and how would they be harmed by a U.S. troop pullout?

China and Russia return as bug-a-bear. Inhofe complained that “both countries view Africa as a critical battlefield to fulfill their global ambitions and challenge U.S. interests.” Sen. James Risch (R-Idaho) and Rep. Michael McCaul (R.-Texas) argued that “Both China and Russia are increasing their presence throughout Africa. U.S. presence is vital to countering those efforts.” Rep. Michael Waltz (R-Fla.) worried that Moscow could gain a port in Libya. “I’m looking at a small footprint and what it costs us now versus what it could cost us in the long run by pulling back.”

Moscow and Beijing have expanded their operations in Africa, but the Cold War should have taught the United States that military competition in Africa tended to be no-win. A few soldiers or special operations forces members won’t turn African states into protectorates or win populations’ hearts and minds. Even money doesn’t guarantee friendship.

Moreover, America’s forces are primarily deployed in counterterrorism work. How do they eliminate an increased Chinese and Russian “presence”? And why must they do so?

In Africa, Moscow is a minor player. It sells weapons, offers training, and provides advisers, modest involvement compared to America’s activities. None of these justify a U.S. military response. How would a few thousand troops scattered across an entire continent prevent Russia from gaining military, political, or economic influence? Moreover, some of Moscow’s activities complement U.S. policy. For instance, Russia sent around two hundred mercenaries to Mozambique to counter an Islamic State affiliate.

Beijing’s most important calling card is the economic calling card, which it often flexes via its Belt and Road initiative funding. Katherine Zimmerman, a resident fellow at the American Enterprise Institute, has argued that “African partners know full well that they are getting a bad deal when working with China, but oftentimes China’s timelines and its blind eye toward human rights and other issues outweigh what the U.S. can offer.”

The presence of American soldiers won’t change that. Even Kathryn Wheelbarger, the acting assistant defense secretary for international affairs, has admitted that the primary issue is influence peddling, which does not warrant a military response. Indeed, it isn’t clear that Washington should worry. The PRC has suffered through its own “Ugly American” experience of the Cold War. African resentment of China has risen in a number of nations, undermining Beijing’s influence.

Sens Chris Coons (D-Del.) and Lindsey Graham (R-S.C), the latter notable for advocating military confrontation around the world, claimed that “A withdrawal from the continent would also certainly embolden both Russia and China.” But since when has either of those governments held back from acting as it wished in Africa? How would U.S. forces constrain either country?

Terrorism and insurgency are additional concerns that bedevil a number of African nations. For instance, Risch and McCaul claimed that “Ten thousand ISIS and Al Qaeda jihadists are estimated to be active across Africa.” Coons and Graham were even more hysterical, warning that a U.S. troop reduction “could result in further instability on the continent and serve to strengthen terrorist groups that could target the homeland.” Indeed, they added: “Any withdrawal or reduction would likely result in a surge in violent extremist attacks on the continent and beyond.”

The challenges faced by many African states are multifaceted. For instance, Nigeria, the continent’s most populous state with significant oil deposits, suffers from regional insurgencies and Islamist terrorism, most notably by, but not limited to, Boko Haram.

Nevertheless, these are not America’s fights. No doubt, Somalia’s al-Shabab, Nigeria’s Boko Haram, and Niger’s Islamic State in the Greater Sahara would harm any American—like the four accompanying a Nigerian military patrol in Niger more than two years ago—who end up within their grasp. However, the United States is not in their sights.
Report Advertisement

Observed AFRICOM Commander Marine Gen. Thomas Waldhauser before the House Armed Services Committee last year: “The threats we are working against aren’t necessarily a threat to the homeland and may not be a threat to the region overall.” He explained: “In many of these groups, we have the intersection of jihadist philosophy with crime, historical influence, criminal activity, shipping of weapons, drugs, cattle and so forth. These groups may hang out a shingle and say ‘we’re with ISIS today.’ But they may or may not have the intent or capability to attack outside their particular part of the country. Even though they may call themselves Al Qaeda or ISIS, sometimes it’s difficult to say they’re a threat to the homeland.”

Naturally, African regimes want America to stick around. For instance, Senegal’s president, Macky Sall, argued that withdrawal “would be a mistake and it would be very misunderstood by Africans.” Meanwhile, Togo’s President Faure Gnassingbe complained that “those terrorists will be stronger here.” Thus, America should “fight on both ends—in the Middle East and in Africa.” Andrew Young, America’s ambassador to Burkina Faso, argued that “ISIS and Al Qaeda affiliates that have attacked us in the United States in the past are expanding their reach in the region.”

Originally published in The NATIONAL INTEREST

Why some African countries are abandoning Paris, joining Moscow