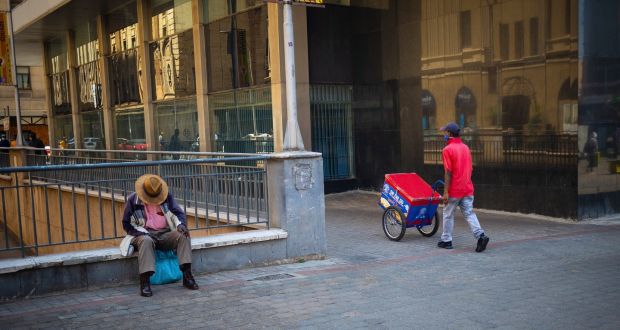 An ice cream seller walks through Gandhi Square in Johannesburg. While South Africa has been hard hit, the continent is doing much better than many expected. Photograph: Kim Ludbrook

Early in the spring, as Covid-19 swept across Europe and the United States and pushed some of the world’s most advanced health systems to the brink of collapse, epidemiologists and public health officials were preoccupied with fear of the harm the disease could inflict once it reached poorer parts of the world.

With its creaking public health systems, overcrowded slums and limited testing capacity, Africa was a particular concern. Uganda had a total of 55 intensive-care beds; in Malawi the figure was 25.

Ventilators were even more scarce: Mozambique had one for every one million inhabitants. It was widely feared that pressure on healthcare systems from the new coronavirus could also impede treatment of other diseases.

In February, the World Health Organisation estimated that without containment measures up to 190,000 people in Africa would be dead within 12 months. The United Nations Economic Commission for Africa had a much higher estimate, saying in April that “anywhere between 300,000 and 3.3 million African people could lose their lives as a direct result of Covid-19, depending on the intervention measures taken to stop the spread”.

Five months on, those worst-case scenarios have not come to pass. As the world marks one million Covid-19 deaths, Africa is doing much better than many expected. The continent’s case fatality rate is at 2.4 per cent, according to Reuters data, with about 35,000 deaths and more than 1.4 million confirmed infections. In North America, the case fatality rate is 2.9 per cent and in Europe 4.5 per cent.

Some of the difference may be down to lower testing rates, but there have been few reports of mass deaths anywhere on the continent and the WHO’s Africa office says that while many asymptomatic cases are being missed – its own analysis suggests Africans may be twice as likely to experience Covid-19 without any illness – there is no evidence of miscalculation of death figures, which are more difficult to miss.

Even when excess deaths are included, the death toll is substantially lower than most predictions. And while infection rates are increasing in some African states, overall the number of new cases has been in decline for more than six weeks.