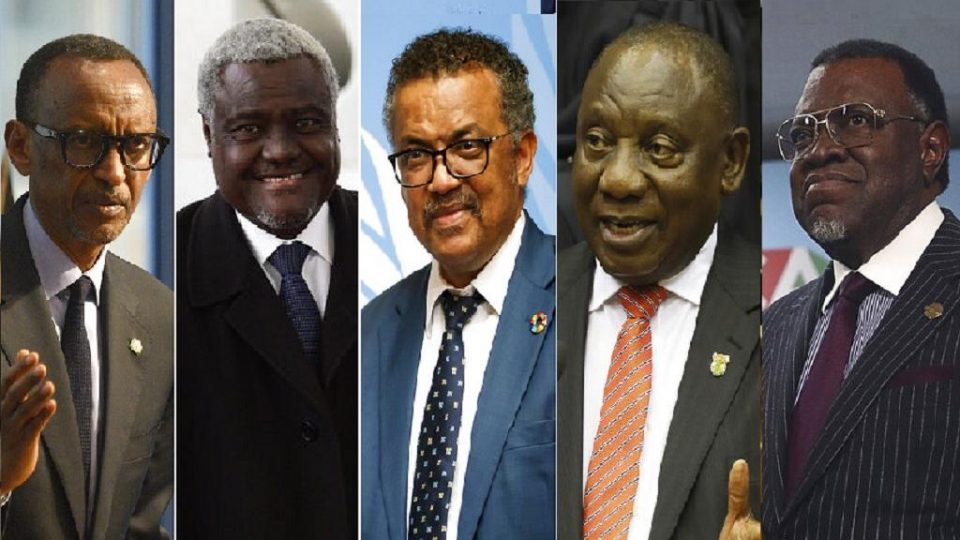 African leaders on Wednesday rallied behind the World Health Organization, WHO, and its Director-General, Ethiopia’s Tedros Adhanom Ghebreyesus; following an attack on the world health body by American president Donald Trump.

The W.H.O. really blew it. For some some reason, funded largely by the United States, yet very China centric. We will be giving that a good look. Fortunately I rejected their advice on keeping our borders open to China early on. Why did they give us such a faulty recommendation,” Trump posted in a April 7 tweet.

As the debate continued over the truth in Trump’s claim, the African Union Commission Chairperson, Moussa Faki Mahamat, posted support for the WHO and Tedros in a tweet of April 8. That tweet set off a reaction from a number of Africa leaders.

Even one person is precious, whether it’s young or old. More than a million cases, what re we doing, is this not enough, it is more than enough. Even the death of one person is a disaster when we can prevent it.

Among them Paul Kagame of Rwanda, Hage Geingob of Nambia and Muhammadu Buhari of Nigeria. The Ethiopian Foreign Minister Gedu Andergachew also posted support for Tedros and the WHO. Tedros was a former Foreign Minister of Ethiopia having previously held the Health portfolio.

South African president Cyril Ramaphosa who doubles as President of the African Union also weighed in reiterating the call for global solidarity. “The most potent weapon against #COVID19 and its devastating health, social & economic impact is international cooperation & solidarity,” he said in a tweet.

Ramaphosa later issued a full statement in his capacity as AU president reaffirming the continent’s support for the WHO. “Overall the AU recognises and appreciates the good work that has been undertaken by the WHO and notes with a sense of satisfaction the various initiatives and measures that are continuously undertaken by the organization to mitigate the spread of the pandemic such as mobilising resources, sharing real-time information and providing technical and material support,” the statement concluded.

Kagame’s response read in part: “Is it Dr. Tedros, WHO, China …under attack or all of them together? Let’s focus on the fight against this pandemic, whoever should be held accountable will come later and done properly. Save us too much politics, Africa does not need it. Who does?”

During his daily briefing on the coronavirus pandemic, Tedros had declined to respond to questions about Trump’s specific criticisms and said, “Why would I care about being attacked when people are dying? I know that I am just an individual. Tedros is just a dot in the whole universe. I prefer to really focus on saving lives,” he said at the media briefing.

For her part, Ethiopian president Sahle-Work Zewde posted on Twitter: “Our global priority is to save lives. WHO
under Dr Tedros’ effective leadership, are delivering on their mandate at a time we need them most. Let’s give them the space. COVID-19 is killing many. We must support & protect the most vulnerable. Now is not the time for blame game.”

Inside America’s big funding of the WHO

The United States contributed nearly $900 million to the World Health Organization’s budget for 2018-2019, according to information on the agency’s website, an amount that represented one-fifth of the WHO’s total $4.4 billion budget for those years.

The U.S. gave nearly three-fourths of the funds in “specified voluntary contributions” and the rest in “assessed” funding as part of Washington’s commitment to U.N. institutions.

A more detailed WHO budget document provided by the U.S. mission in Geneva showed the United States provided $452 million in 2019, including nearly $119 million in assessed funding. In its most recent budget proposal from February, the Trump administration called for slashing the U.S. contribution to the WHO to $57.9 million.

At a White House news conference on Tuesday, Trump chided the agency for what he called “China-centric” leanings and said the WHO had “missed the call” on the coronavirus pandemic, notably by advising against travel bans to places like China.

Trump initially said the U.S. would “put a hold” on funding for the WHO, and then revised that to say, “We will look at ending funding.” Some U.S. lawmakers demanded that Tedros resign in order to ensure U.S. funding for the agency.

Asked Wednesday at the WHO’s daily briefing in Geneva about the criticism from the U.S., the director-general initially responded by saying he wouldn’t answer the question.

“I don’t think that’s necessary,” he said. “We shouldn’t waste time pointing fingers. We need time to unite. … Let’s unite. … The worst is yet to come if we don’t rush to ensure the unity.”

“We will have many body bags in front of us if we don’t behave. When there are cracks at national level and global level, that’s when the virus succeeds. For God’s sake, we have lost, we have lost more than 60,000 citizens of the world.

“Even one person is precious, whether it’s young or old. More than a million cases, what re we doing, is this not enough, it is more than enough. Even the death of one person is a disaster when we can prevent it.

“So my advice, three things: Please, unity at national level. No using COVID for political punches. And then second, honest solidarity at global level and honest leadership from the US and China. Like the Cold War, we have less problems compared to (the) Cold War, those who have differences should join hands to fight it.