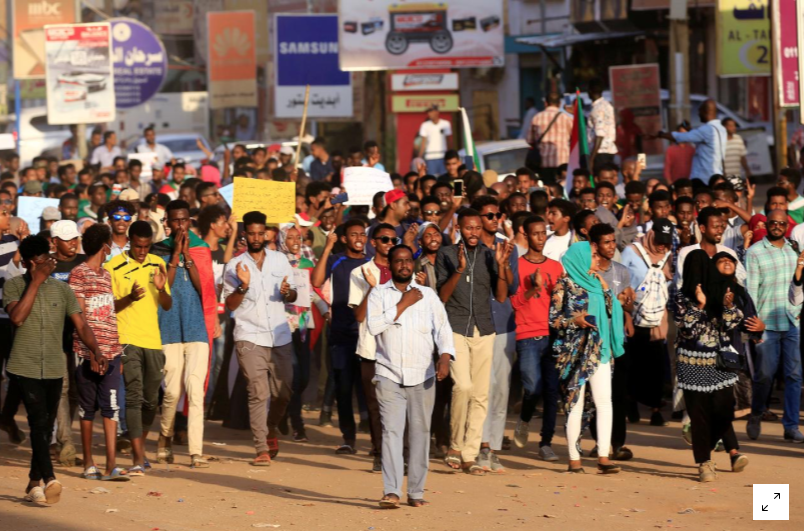 Tens of thousands of Sudanese demonstrated in Khartoum and other cities on Monday to call for the former ruling party to be dissolved and for ex-officials to be put on trial.

Thousands gathered in Freedom Square, where ousted president Omar al-Bashir held a large rally in his final months in power, to call for the dissolution of his National Congress Party and to put Bashir-era officials on trial for alleged corruption.

A key demand of the rally, called by the Sudanese Professionals Association (SPA) that spearheaded anti-Bashir demonstrations that led to his overthrow, was to hold accountable those responsible for a deadly raid on a sit-in near the Defence Ministry on June 3.

Late on Sunday, after the SPA called for the rally, Prime Minister Abdalla Hamdok named a commission to investigate the raid in which security forces killed dozens.

The number of victims has been disputed. Doctors linked to the opposition said nearly 130 were killed in the raid and ensuing violence. Officials have acknowledged 87 deaths.

The SPA welcomed the appointment of the commission, calling it “the first brick in the structure of a fair investigation and the revelation of the perpetrators of the crime”.

The commission will be headed by human rights lawyer Nabil Adib. It will include senior security officers as well as other lawyers.

Protesters demanded a swift response in its investigation of the raid on the sit-in, which was a culmination of 16 weeks of protests that led to army officers turning against Bashir and replacing him with a military council.

“I am taking part in this rally to demand accountability for the murderers of the revolution’s martyrs,” said Mazen Mostafa, a 20-year-old university student.

In August, civilian and protest groups, including the SPA, and the military, signed a three-year power-sharing deal leading to the formation of a sovereign council and the appointment of a technocratic, transitional government under Hamdok.

The investigative commission will be charged with identifying those responsible for breaking up the sit-in, establishing the number of dead, wounded and missing, and the financial losses incurred by those affected.

It is supposed to finish its work in three months, with possible one-month extensions if it submits progress reports.

“We want the investigative commission to work transparently and investigate all the suspects, including the members of the former (military) council who are now members of the sovereign council,” said Hadeel Ahmed, a 28-year-old demonstrator.

“We will not accept any complacency in the commission’s work and we will guard the blood of the martyrs.”

In a speech televised on Monday evening to commemorate the 55th anniversary of Sudan’s October 1964 revolution, Hamdok praised the uprising that led to Bashir’s ouster and said much work needed to be done to fulfill its demands.

“The issue of justice for your government is not a matter of political gain, it is a matter of principle that includes restitution of rights and grievances, healing wounds and providing compensation to survivors and victims over the past 30 years,” he said.