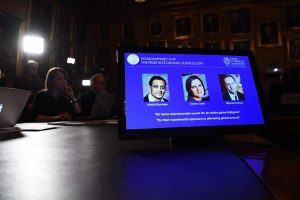 The Nobel Prize in economics was awarded Monday to three researchers — including the youngest-ever recipient — whose approach to alleviating global poverty has been widely adopted in the field.
Economists Abhijit Banerjee and Esther Duflo of the Massachusetts Institute of Technology, and Michael Kremer of Harvard University were cited for pioneering research that “has considerably improved our ability to fight global poverty.” Duflo, at 46, is the youngest person ever awarded the prize in economics and only the second woman.
Duflo said the experience was “incredibly humbling,” and that the three laureates stood for “hundreds of researchers” who work on global poverty.
In Monday’s announcement from Stockholm, the Royal Swedish Academy of Sciences credited the three researchers for breaking down large questions about poverty to focus on “smaller, more manageable questions,” such as the best interventions for improving child health, and using field experiments to solve them.
In the 1990s, Kremer launched a number of field experiments in western Kenya to improve educational results. Banerjee and Duflo later conducted similar studies, building research methods that “now entirely dominate” development economics, according to the Nobel committee.

Those efforts helped inspire school tutoring programs that have benefited more than 5 million Indian children, for instance, as well as preventive health-care subsidies in a number of countries, the committee said.

“In just two decades their new experiment-based approach has transformed development economics, which is now a flourishing field of research,” the Nobel Prize committee said on Twitter. Later, in a news release, the panel noted that, “Due to their work, field experiments have become development economists’ standard method when investigating the effects of measures to alleviate poverty.”

The three laureates were among the first to attempt to measure the real-world effects of poverty-alleviation efforts in a wide array of areas, including access to credit, preventive health care and the adoption of new technologies.
Their research found even small differences in prices can lead to dramatically different health outcomes, particularly in preventive care. Kremer, for instance, discovered that 75 percent of poor parents would give their children deworming pills for parasitic infections when the medication was free, compared with only 18 percent when the medicine cost less than $1, according to the Royal Swedish Academy of Sciences.

Subsequently, the committee said, the World Health Organization recommended that medicine be distributed at no cost to more than 800 million schoolchildren in areas where more than 20 percent have a certain kind of parasitic worm infection.
This year’s Laureates have introduced a new approach to obtaining reliable answers about the best ways to fight global poverty. It divides this issue into smaller, more manageable questions – for example, the most effective interventions for improving child health.#NobelPrize pic.twitter.com/faQTTZhJqI
— The Nobel Prize (@NobelPrize) October 14, 2019
Their research also suggested clear incentives and accountability for teachers could reduce absenteeism, finding “pupils who had teachers on short-term contracts had significantly better test results,” according to a news release by the committee.
The economists also conducted an “initial” study on microcredit programs, or the giving of small loans, to poor households in the Indian city of Hyderabad. Additionally, the panel cited their work in showing that some poor individuals were more likely to adopt temporary subsidies — for agriculture improvements such as artificial fertilizer — rather than if they are permanently on offer.
AD
The three laureates are expected to split a $915,000 cash prize. Asked by a reporter what she would do with the winnings, Duflo noted that the first woman to win a Nobel Prize, Marie Curie, used her money to buy a gram of the element radium.
“I guess we’ll talk between the three of us and figure out what is our gram of radium,” Duflo said.
Duflo and Banerjee are married, making them at least the sixth such partners to collect Nobel Prizes. Curie and her husband, Pierre Curie, shared the 1903 prize in physics (She won again in 1911, for chemistry). Their daughter, Irène Joliot-Curie, and her husband, Frédéric Joliet, were awarded the chemistry prize in 1935.

The economics prize is the last Nobel to be awarded. On Friday, Ethio­pian Prime Minister Abiy Ahmed won the Nobel Peace Prize for his dogged pursuit of democratic reforms and peacemaking efforts in the region.